Martyn Jackson: As a teacher 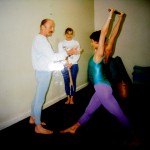 Shelley Piser: How do you differ from what you have been taught and how did you evolve into your own?

Martyn Jackson: I am a therapist, really. I am physio trained but never did the examination because there were other things on my mind like, I wanted to do that training,  I wanted dance and there were so many things I wanted and I felt that I had a lot to offer more then a lot of teachers because I had that medical training plus the yoga training. So I could help more people. The healthy people I am not so worried about, they’ve got the health and I HOPE the intelligence to retain that health.I did this, I think, for people who found it difficult to be motivated themselves.So I feel that they needed my assistance.And those are the ones who seem to be drawn to me. I didn’t advertise, I didn’t charge at all.I never charged for a yoga class.I would put a tin down for donations. I survived that way until one day my accountant’s wife came around and she became a regular participant and she said, “Martyn, you know, why don’t you charge?”I said, “Yoga philosophy doesn’t work that way.”I only didn’t because I was farming and I had money and I could pay for things with my own money. But I realized that with a family that I couldn’t keep that up.

Because the rents were gradually increasing and that was putting a demand on my private income. Then, I never raised the fees myself, my account’s wife, she was regular and she would put the fees up from two shillings to half a crown, that was in ’64, and from a half a crown it went up to five shillings. From five shillings, this was over a period of years; it went up to one dollar. This is where we are now, paying six or going up to seven at the end of the month because our rent is going up a thousand a month just now, just these last two weeks. That’s the reason, but I don’t like that. It’s not my way of teaching. 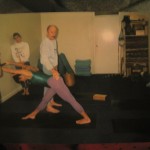 SP: As far as your teaching that makes you an individual, what is your philosophy in your approach to hatha yoga?

MJ: I don’t segregate hatha yoga the different yogas because if you are just going to call it hatha yoga people are going to come and they want to exercise, they are going to do this meditation stuff. I will agree with them. I’ll say, “wonderful!” but after they have been coming awhile, I’ll say how do you feel and they will say “Wonderful!” I’ll say, “Do you believe in meditation anymore?” I’ll say,   “You have actually been doing that the whole time you have been with me. In order to do an exercise correctly, to do an asana correctly, and to retain the posture for two or three minutes at a time,  you’re focusing on to a point  and then you begin to let go. That is meditation.” I said. You have taken on the wrong translation of meditation where you get these pseudo teachers to come out and sit you facing a wall in a corner or something and tells you to watch your breathing or something. That is not necessarily meditation. It is meditation of a type, but for every person, there is a different type of meditation. So, they didn’t understand that. So they had the wrong concept of what meditation was about. You can’t practice the physical, you can’t practice hatha yoga without karma yoga without the kria yoga without the raj yoga, because it includes everything.