Warning: "continue" targeting switch is equivalent to "break". Did you mean to use "continue 2"? in /homepages/9/d230289293/htdocs/writeonyoga/blog/wp-content/plugins/contact-form-by-supsystic/modules/supsystic_promo/mod.php on line 499
 MARTYN JACKSON on Teaching and the Direction of Yoga – Write on Yoga

MARTYN JACKSON on Teaching and the Direction of Yoga

Keep in mind that this interview was done in 1988.  Yoga today has become quite a business in many of the ways that Martyn talked about over 25 years ago.

Shelley Piser: What direction do you think Yoga is going in the West?

Martyn Jackson: I feel a little nervous about it because I can see I feel that I had very good training at the beginning and I’ve tried all of the years from then on to get yoga, to introduce Yoga as I was taught and not to sell it to people as something pseudo. Not that yoga is going to do this for you or yoga is going to do that for you. Yoga will do nothing for you unless you’ve got that self-motivation, unless you’ve got that spiritual ability to be able to go within and not just to do exercises and just get a beautiful body out of it. I mean some people, ok they will do that and probably that’s the depth of what they understand yoga. Yoga to me is something; yoga is very precious, very precious. I feel through the practice of yoga, and understanding life better that it has pulled me through this sickness that I’ve experienced in the last six months.

SP: And it would change the direction of where you are headed now?

MJ:  Yes, I am sure it will. Yeah definitely. If I am invited to other countries, then again I am not going to say, “teach my method” just “teach my feelings” Because yoga is nobodies, yoga is universal. Yoga is there to lift yourself to another understanding. Because, life is on different levels of understanding and each and every one of us are on different levels. So I am very fearful of the way yoga is going at the moment.  Although the association is good, the association is there to bring everybody together and get that understanding. But, everyone is fighting each other. You know, putting themselves up, as ‘I am the better teacher,’ ‘I’m the better teacher.’ “You shouldn’t do this, you shouldn’t do that”

You have got to work according to your pupils. You’ve got to work according to your feelings. As long as you are devotional to your practice, and then you are closer to the truth. If you penetrate with each asana, with everything that you do like In pranayama, if you penetrate deeply then you will get more clarity of what life it’s about and that becomes more truthful and that will give a better understanding. And what you experience from a soul, that is truth. You can talk to other people and they will say “oh no it’s not that way,” but that’s the way you experienced it. If you feel good about it, if you feel, you know if you are doing something that is incorrect, if you are practicing something that you know is damaging then you shouldn’t practice that. Penetrate it to the limit, and then you say, ‘No, this is not right.’ So you try another way and you feel, “ahh, this is it!” And if that penetrates you, then you’ve got to bring it together that if there are pupils in your class and you talk to them and then they talk and the way they answer your question, you can see at what level they’re at the moment. That’s the important thing, knowing what level your pupils are at the moment.

SP: Do you feel that the direction of Yoga is sincere in the way that the association [Iyengar] is driving it?

MJ: No, I don’t think so. I don’t think that they really understand what is happening yet. I think there are a few intelligent people like that out there who have the wrong concept of yoga. I think they look at yoga as just a few exercises, standing on your head, shoulders and so on but I don’t really feel that they understand the philosophy of yoga. This is what I feel myself, personally. And I feel a little nervous about the way it’s going. There are so many people being drawn to this wonderful art but they don’t look at it. They are not feeling, they are not sensing what yoga is really about and I am a bit worried about it.

SP: What about for yourself. How does your own method of teaching the asanas which other Iyengar teachers would disagree with or have conflict with?

MJ: OK, that again comes into the medical side. When I was younger, I always wanted to be a doctor. I was always wanted to be dealing with bodies and sometimes with the book system by Mr. Iyengar. I am not saying he’s wrong, he’s not wrong at all because he is working very systematically but myself, I am not frightened to change them around. As long as I work in a systematic way: arms, shoulders, trunk, leg, lateral abdominal, and dorsal. I am still being effective with the whole body. I won’t follow a shoulderstand after headstand, not right away. Or I’ll probably do a headstand at the beginning of class so that they are more stable at the beginning. But occasionally I’ll put a headstand at the end of the class to test their stability.

If I’m a teacher, I’ve got to be creative myself, I can’t rely on my teacher to be always around with me. I love my teacher so much that his presence is there, and if I don’t, if I am not satisfied with my teacher, I will talk with him about that. So he can give me suggestions. But the day comes when you’ve been, if a good teacher has taught you and you go back to him occasionally so that you are revitalized and you become creative yourself. And then you’ve got to begin to take over and your teacher goes his way and you go yours. You’ve got to develop your method also. As long as the basics are there.

It’s like dancing. You do your classical dance and that’s a foundation and that’s a bank of knowledge as you’re going along you can be creative, you can create another movement that you’ve never did within the classical movement. So you can bring that new movement that you have brought. It’s not a new movement at all. It is only because of your practice that you’ve raised to another level and then you’ve put your creation, otherwise you’ll never improve. You’ll be at your teachers level. I mean you’ll probably be better then your teacher.

SP: So this, in a sense, is a confinement that the Iyengar associations are creating?

MJ: I’ll give you an example now. I did everything religiously that Mr. Iyengar taught me. I wouldn’t mention a word that hasn’t been mentioned by Mr. Iyengar. I did that for about twelve years, especially with my Pranayama. Religiously I would sit at a quarter to four in the morning, I had all of my things laid out all of the time. No one else would ever enter that room; no one else would go into that room and touch. Twice a day I would do that. I would sit for two hours solidly and practice my pranayama as I was asked to do and shown how to do in India with him. Then, one day, I said, “Martyn you are not progressing, you are getting your breath under control alright, but you seem to be stuck in the mud. So, why not listen to your body and do what it wants to do instead of listen to Mr. Iyengar all of the time, because you are an individual, he is an individual. His book is a guide, a textbook, just to give you guidance.”

This is what gets people mixed up. They get the book and think that they must stick religiously to the book. But that’s wrong, that means that you are going to stale-mate, you are not going to improve at all. OK? Although you are teaching, You’ve got a level of teaching for a certain level of pupils. But you’re not growing yourself. Your pupils are going to get to yourself and they are going to leave and feel that they can’t get any more from you. Understand? So you’ve got to be creative yourself and your teacher should respect that. That’s what I want. I want pupils that will come to my level and then say, right, and pursue something more. And still end up friends and able to communicate. God forbid for anybody to stay at one level. I want to see somebody that I’ve trained or assisted in training that’s reached that sky-high, reached limit if possible. That’s if we can get that

SP: There needs to be a new generation coming up.

MJ: Yes, this is right. But you must watch this Americanism and I am not saying that against you and it is the English as well. But it starts in America. It starts in California unfortunately, you know? And there are people that mis-represent their teacher. They don’t really understand. I don’t care how much I am talked about because people talk about me and I always get one more followers, you know, because people will come to me just to see who this person is. And then I teach in a certain way and they either hate me or love me. Like Mr. Iyengar, they either hate or love him immediately, but that shouldn’t be our concern. Our concern is working the person; each person that comes to us as we feel that they need.

This is why I don’t like to take General classes, because you can’t give each individual what they need.  All you can give is just a general guidance and that doesn’t suit everyone. Just one person in that class might be getting something out of it. You’ve got to have that individual practice.

You’ve got to have that individual eye-to-eye contact you know. Even if it is for just ten minutes at a time, that is worth two hours. Five minutes in a class with eye-to-eye contact and just that little assistance is worth two or three hours every day. That’s what I feel bad about in taking big classes. You’ve got to have the big numbers to pay for the rent unfortunately. If society was to say “OK this is your life and you are doing a lot of good,” if they were to say, ‘Now look, we’ll get a center for you, just a small center for you, and we’ll look after you. You’ll have no worries of finance.’ And I wouldn’t ask for anything. That’s how I would love to teach. I would love to teach where I didn’t have any responsibilities financially, emotionally and all I want to do is to be there to serve. And that’s what I’d like. 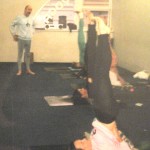